Press Release:
August 11, 2015
Over 50 people packed the Roseberry House for the visit of the Wolf Historical Society of Bath, Pennsylvania on 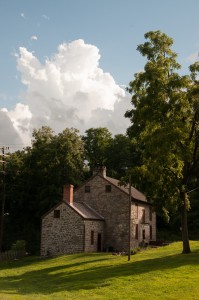 Tuesday afternoon. About half were from Bath; others in attendance were guests from Washington (NJ), and contractor Bob Doerr, whose firm built the windows, shutters and doors, and Dennis Dillon, who did much of the carpentry work on the attached kitchen. Several local people stopped by just because they saw the house was open and had never been inside. The Wolf Historical Society made a generous donation (a much appreciated and unexpected gesture), and we sold out of the Secrets of the Old Stone House book (We could have sold a lot more but we’re trying to get some in the hands of the organizations that have funded our work.)

The Wolf Historical Society guests were amazed by the Roseberry house—its large size, the work we are doing and several said they were especially dazzled by the wall stenciling. Many had their cameras out and were taking photos of the architectural features and the stencils. They extended an invitation to the PAHS to visit the three buildings in Bath they are responsible for, and several of us are very inclined to take them up on their offer. . . soon.

Thanks for Carol and Melissa Lupi who spent several days cleaning the place and made treats for the visitors, too; to Donna Fulton for additional refreshments and punch, and to Todd Tersigni, Randy Piazza and Steve Zarbatany who filled a couple of truck loads with the detritus of the garage sale earlier in the summer. 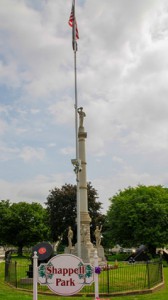 A Brief History of the Monument

The Soldiers’ and Sailors’ monument was dedicated May 10, 1906 and stands at the apex or “point” of what was originally known as the “Town Lot” next to the Lovell School Building; known today as Shappell Park. The monument stands approximately 48 feet high and was built of “Barre Granite” quarried from Vermont at a cost of $5,500.00.

The fund raising efforts made slow progress at first. A committee consisting of Civil War veterans and various citizens was organized in 1896 after a resolution was passed by Tolmie Post No.50, G.A.R.(Grand Army of the Republic), for the purpose of raising funds to erect a monument honoring the memory of all soldiers and sailors from the Phillipsburg Area who fought in the Civil War. The committee later passed a resolution to place collection boxes in school buildings and other public locations to give school children and others an opportunity to raise funds. Approximately $600.00 was raised through these efforts but, the school board later prohibited the collection of monies in the schools and little work was done for the next five years.

In October 1901, an “Executive Committee” was established to continue raising funds for the project. A small amount of money was raised after approaching a few churches and societies and was added to the initial $600.00. Afterward, the Tolmie Post, once again, took up the fund raising efforts and another “General Committee” was formed.

The “General Committee” held a two week fair in May 1905, successfully raising $3200.00. This money in addition to the money initially raised allowed the project to move forward. Various contractors from the area were given the opportunity to submit designs and price quotes. The project was awarded to D.J. Howell’s and Sons, of Easton, PA.